Comes the "season to be jolly" — not to mention extra vigilant during takeoff, landing and ground operations. Here are a few brief examples of problems some pilots encountered last winter. Perhaps their experiences will help keep you out of trouble.

— The experienced PA23 pilot lined up with the centre of the runway on approach — at least he thought that he did. The snow-covered unmarked runway was difficult to distinguish from the surrounding terrain and he landed beside it. The right wing struck a snowbank at high speed and the aircraft pivoted 180° and ended up well bent (photo). 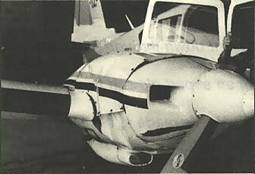 — Enroute, a low-time 172 driver decided to land to make a phone call. The airfield he picked was only semi-snow-cleared, and so he attempted a short-field landing with an 8-kt. tailwind. He didn't make it. On the roll-out the aircraft swung to the left, and right rudder didn't stop it. When the left wheel contacted snow at the edge of the runway, it dragged the aircraft around further. It slid sideways 400 ft. through deep snow, damaging the mainframe and lower cowling. Then he had a few more telephone calls to make.

— Another 172 pilot got too low on final in strong gusty winds. The mainwheels touched a snowbank just short of the threshold and the aircraft flipped onto its back (photo). He hadn't made enough allowance for the gusts and hadn't seen the snowbank. 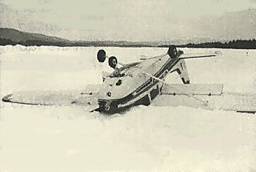 — A 150 student was practising solo for his night rating. On landing, the aircraft bounced. With the nose high, he lost track of the runway. The aircraft drifted left and, when it touched down again, the left wheel was in snow. This dragged it into a snowbank, where it nosed over inverted. Diversion of attention, even briefly, can lead to trouble.

— A Bellanca pilot was done in by a patch of slush. After the landing, the left wheel hit the patch and the machine was dragged into a snowbank and badly damaged.

— A PA28 pilot was practising "off airport procedures". The trouble was that the wind was outside the maximum crosswind limits on the runway that he elected to use. It was more favourable on other runways. He used 25° of flap on approach and landing, then brought them up shortly afler touchdown. As the aircraft decelerated, it weathercocked into the snowbank along the side of the runway. Ignoring the "book" resulted in an unexpected "off airport" landing, a bent propeller, a damaged nose gear, a crumbled wing, and probably a sadder but wiser pilot.

— The pilot of a ski-equipped 185 purposely planned to take off close to the edge of a snow-covered taxiway with center bare patches. Unfortunately, he was a little slow correcting for gyroscopic effect as he poured on the power. The aircraft swung. The left ski hit a snowbank and that was the end of the trip. The manoeuvering safety margin had been cut too fine for recovery after a mistake.

— An experienced senior commercial pilot with an instrument rating had difficulty seeing where he was going on takeoff. It had been snowing all day and the runway was covered with two inches of fresh snow. Vis was down to less than a mile. Melting snow on the heated windshield added to his visibility problem, even though he got out of the aircrafl just before takeoff to wipe it off. The runway lights were partially obscured by snow and he had trouble making out the edges of the runway. He lined up with what he thought was the center and applied takeoff power. The aircraft went straight as an arrow at a slight angle before it ran off the runway some 600 ft. along (photo). The nosegear collapsed as it plowed through a snowbank. 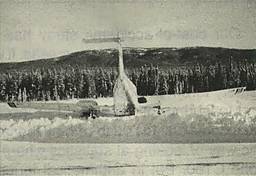 Two propellers were bent and the nose split open (photo). The provincial government operating the airport is evaluating a more suitable type of day/night/all-year runway markers. 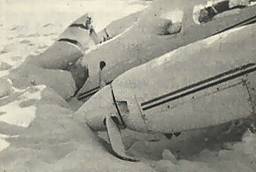 A few reminders of winter hazards from other pilots' experiences. We don't want to write about you next year.