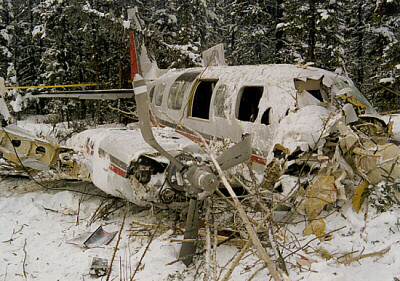 On January 15, 1998, a Piper PA-31-350 Chieftain was on a passenger flight from Edmonton to High Level, Rainbow Lake, Edmonton and Calgary, Alberta. Following an uneventful flight to Rainbow Lake, the aircraft departed in darkness at 19:35 Mountain standard time on an instrument flight rules (IFR) flight to Edmonton. Shortly after takeoff from Runway 27 the aircraft collided with trees and terrain approximately 3000 ft. west of the departure end of the runway. The 9 occupants sustained minor injuries, and the aircraft was substantially damaged. This synopsis is based on the Transportation Safety Board of Canada (TSB) Final Report A98W0009.

The sky was clear with unrestricted visibility and light winds. The ambient lighting conditions were described as dark, with no moon, little illumination from the night sky and no lights to the west of the airport. The operator chartered the Piper PA-31-350 Chieftain and a pilot from another company. The company had flown the route for the operator in the past; however, the pilot had not previously flown for that operator. He had been employed as a charter pilot for approximately 6 months, held a valid airline transport pilot licence (ATPL) and had accumulated 3700 hrs of flight time, including 93 hrs on Piper PA-31 aircraft and 590 hrs at night. His background included flight instruction and charter. The majority of his charter experience was as a single pilot. He had never received formal two-crew flight training, recurrent ground training or simulator training that emphasized CFIT prevention strategies.

The operator routinely assigned two pilots to comply with the requests of a number of regular passengers and to inspire confidence. In accordance with that policy, a "co-pilot" was part of the flight, but was in fact a customer service representative, and not a flight-crew member. He assisted with baggage loading, passenger briefings and so on. He held a commercial pilot licence with an instrument rating, but did not hold a pilot proficiency check (PPC) for a Piper PA-31. The captain preferred to operate the aircraft as a single pilot, and the "co-pilot" was not assigned any formal cockpit duties.

There were no reported mechanical abnormalities with the aircraft. It was fitted with an approved supplementary device that increased the maximum permissible takeoff weight from 7000 lb. to 7368 lb. Runway 27 at the Rainbow Lake Airport is 4500 ft. long, with low-intensity runway edge lights, green threshold and red end lights and no approach lighting. It slopes uphill, and departures are accomplished into rising terrain.

Each passenger was permitted to transport a maximum combined weight of 50 lb. When the total load exceeded the gross weight of the Chieftain on any leg of the flight, it was the operator’s policy to remove the second pilot from the flight before reducing the number of passengers. Neither the chartered company nor the pilot had been advised of this policy.

The pilot completed a computer-generated flight plan and gross weight calculation, but there was no evidence that centre-of-gravity (C of G) calculations were performed. The visual flight rules (VFR) flight plan indicated that there would be a fuel stop in Peace River on the return leg. However, when the aircraft arrived in High Level, the pilot was informed that the operator did not normally stop in Peace River for fuel and preferred that the aircraft not do so in order to ensure that the flight remained on schedule. The pilot consulted with the "co-pilot" and was advised that one male passenger had been replaced with a female passenger, that most of the passengers would be travelling light, and that several of them weighed less than the standard passenger weight. The pilot amended the flight plan and added fuel to complete a VFR flight to Rainbow Lake and an IFR flight to Edmonton. A copy of the original company flight plan indicated that the pilot had originally planned to leave Rainbow Lake with 504 lb. of fuel.

The aircraft struck several trees with wings level in an approximate three-degree descent. It came to rest upright, and the cockpit and cabin sections remained intact; the occupant survival space was not compromised. The wings-level impact attitude, the shallow impact angle, the small tree size and the presence of approximately two feet of snow on the ground had contributed to maintaining the deceleration forces within the limits of human tolerance. The aircraft was reportedly equipped with a survival kit, as required by regulation, but investigators did not locate the kit in or near the aircraft.

Aircraft using Rainbow Lake airport typically take off from Runway 09 during night departures if the wind conditions permit, as several lights are visible to the east then. On arrival at Rainbow Lake, the pilot had been advised by the "co-pilot" of a minor frost heave in Runway 09 near the runway threshold. To avoid the risk of damaging the nosewheel during takeoff, the pilot elected to depart on Runway 27.

The pilot selected 10° of flap for takeoff and rotated at 85 kt. indicated airspeed (IAS). He believed that the aircraft became airborne at 90 kt. approximately halfway down the runway, and that he had established and maintained a positive rate of climb. He reported that he was waiting for the aircraft to accelerate to the "blue line" speed (best single-engine rate of climb) of 107 kt. IAS prior to lifting the flaps when the aircraft struck the trees. The landing gear and the flaps were in the UP position at impact.

Soon after liftoff, the pilot was confronted with dark, featureless terrain. Darkness and the absence of external visual clues may induce a false perception of altitude and attitude. Under acceleration, the combination of gravity and inertial forces produces a resultant force at an angle aft of the true vertical. This force, acting on the vestibular system of the human inner ear, can give a false pitch-up sensation. While the aircraft may be flying straight and level or climbing slightly, pilots may have a sensation of climbing at a much steeper angle than they actually are. Without visual input to override the false sensation, the pilot will usually pitch the aircraft’s nose down to correct the perceived steep climb, and inadvertently descend. This form of spatial disorientation is known as the "false climb" or somatogravic illusion. The extent, if any, to which somatogravic illusion contributed to this accident was not determined.

The TSB’s analysis focused on the pilot’s applied IFR/night takeoff technique, the role and influence of the "co-pilot," the communications between the chartered company and the operator, the request to change the flight plan, and the effect of the overweight condition of the aircraft on the departure. Individually, these factors would likely not have been significant enough to cause an accident. When combined with dark ambient conditions and an uphill takeoff toward rising terrain, these factors collectively established a window of opportunity for an accident to occur.

The pilot’s night departure technique is considered to be the active failure in this accident. Night departures in dark conditions require full use of the aircraft flight instruments, and it is essential that the pilot achieve and maintain a positive rate of climb. In the absence of outside visual cues, the pilot must rely on the aircraft instruments to maintain airspeed and attitude and to overcome any false sensations of climb. The pilot was either relying on outside visual cues during the initial climb and/or using only a partial instrument panel scan while being influenced by the false-climb illusion. Pilots can overcome false sensations by flying the aircraft with reference to the altimeter, vertical speed indicator, attitude indicator and airspeed indicator, which, in this case, would likely have allowed the pilot to detect that the aircraft was not in a climb. The appropriate technique would have been to climb at the aircraft’s best rate or best angle-of-climb speed until above all obstacles rather than become preoccupied with reaching blue line.

The role of the "co-pilot" is somewhat ambiguous, and his presence does not appear to have contributed to the safety of the flight. Because he was not familiar to the captain and because he was not delegated flight-crew responsibilities, his participation during the flight created a situation of crew resource mismanagement. The co-pilot’s remarks regarding the weight and flight-plan changes at High Level appear to have encouraged the captain to cancel the planned fuel stop in Peace River. The co-pilot did not advise the captain that, if weight was a concern, he could remain in Rainbow Lake. The co-pilot’s apparent well-intentioned advice on the frost heave near the threshold of Runway 09 influenced the captain’s decision to take off on Runway 27, which was uphill toward rising terrain and with no lights visible after departure.

The estimated weight of the aircraft at takeoff, which was approximately 315 lb. above the prescribed increased gross weight, and the C of G, which was at or beyond the rear limit, would have increased the takeoff distance and reduced the climb performance of the aircraft. The request to the captain in High Level to add fuel in order to avoid a stop at Peace River contributed to the aircraft’s being overweight on departure from Rainbow Lake.

Communication between the operator and the chartered company with regard to the duties of the co-pilot and the weight of the aircraft at departure from Rainbow Lake were inadequate. Both companies were familiar with Piper PA-31-350 capabilities, and the weight and balance calculations performed prior to the aircraft’s leaving Edmonton indicated that the trip would have to be accomplished VFR, with a fuel stop at Peace River, to accommodate the passenger load. Critical information, such as the option of dropping the co-pilot in the event of an overweight aircraft condition, was never provided to the chartered company. The pilot, who was the final decision-maker, was put in the position of having to balance the conflicting objectives of operating the aircraft within the prescribed weight limits and satisfying the customer’s demands. He was relatively inexperienced on Piper PA-31-350 aircraft, having flown less than 100 hrs on the type, and, because he had not previously flown for the operator, he was unfamiliar with its daily flight routine.

The TSB determined that the aircraft was inadvertently flown into trees and the ground in controlled flight and dark ambient conditions during a night departure because a positive rate of climb was not maintained after takeoff. Factors contributing to the accident were the pilot’s concentrating on blue-line speed rather than maintaining a positive rate of climb, the dark ambient conditions, a departure profile into rising terrain, an overweight aircraft and crew resource mismanagement.