At about 1600 Pacific Standard Time in daylight conditions, a group of 4 light aircraft took off from the Langley Regional Airport in Langley, British Columbia, for a local formation flight to Chilliwack, British Columbia. At about 1615, during a turn, one of the Cessna 150 and another Cessna 150 collided. The 2 aircraft briefly descended joined together and out of control, but at about 400 feet above ground level, they separated. The first C150 broke up in flight and fell to the ground; the 2 occupants were fatally injured and the aircraft was destroyed. The pilot of the second C150 regained control of the aircraft and landed in a farm field without injury. There was no fire and the emergency locator transmitter on the first C150 activated upon impact with the ground. 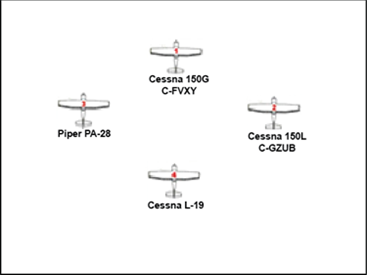 During left hand formation turn maneuver, the lateral distance and step-back of the number 2 aircraft on the leader's right side increased somewhat, but the right hand C150 returned to its original position once the flight rolled out on the northerly heading.

Shortly after, the leader announced a right turn and this time advised the number 2 aircraft to reduce engine power since it was on the inside of the turn. The 4 aircraft then entered a level, 15°angle-of-bank right turn at 1500 feet asl to return to the southerly heading.

During the turn, the pilot of the right diamond lost sight of the lead aircraft, turned away to the right and descended. After a brief interval, the right side diamond turned left and climbed while the pilot searched for the leader to rejoin the formation above.

At 1615, seconds after the leader called a roll-out, the two aircraft collided at almost 70° to each other. The aircraft began to rotate and descend joined together, and fell out of control for several seconds. At about 400 feet agl, the aircraft separated; the lead diamond aircraft broke up in flight and fell to the ground, while the pilot of right side diamond regained control and landed the aircraft without engine power in a farm field.

No reports of turbulence or other unfavorable weather phenomena were observed. Weather was not a contributing factor in this accident.

This accident was an associated midair collision: the pilots involved were intentionally flying in close proximity in a pre-arranged formation flight. The flight profiles of both accident aircraft indicate that neither pilot saw the other aircraft in sufficient time to initiate effective and timely evasive action. The investigation could not determine what was taking place in the flight deck of the lead at the time of the occurrence.

No evidence of pre-existing mechanical defect in either aircraft was found. Accordingly, this analysis focuses on the operational issues and hazards of formation flight, and on the flight path, to provide the most likely explanation as to why these 2 aircraft collided. 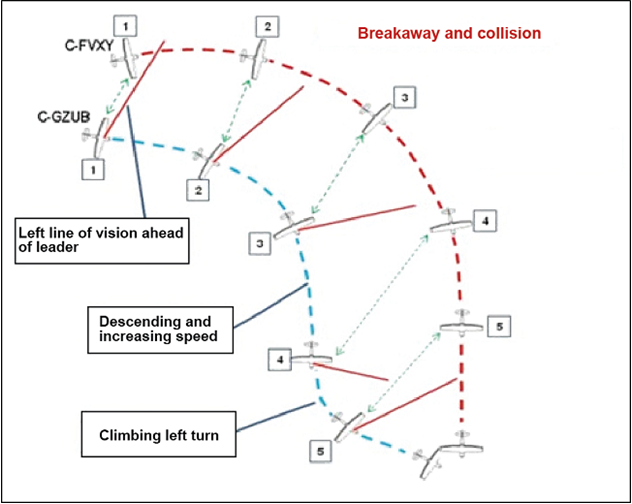