At approximately 1900 Eastern Daylight Time on 03 June 2010, a Lake Buccaneer LA-4-200 amphibious aircraft with the pilot and a passenger on board departed on a visual flight rules flight from Lac de la Marmotte II to Baie Comeau, Quebec. The 98 nautical mile flight was to take approximately 1.3 hours. When the aircraft did not arrive at destination by the end of day on 04 June 2010, a search was started on the morning of 05 June 2010. Using sonar, the aircraft was located on 26 June 2010 by the Sûreté du Québec police dive team at a depth of 230 feet in Lac Berté, 5 nautical miles south of Lac de la Marmotte II. The aircraft and occupants were recovered on 02 and 03 July 2010 with the assistance of a remotely operated vehicle with underwater camera. The aircraft sustained substantial damage on impact with the surface of the water. The pilot and passenger were seriously injured and drowned. No emergency locator transmitter signal was detected by the search and rescue system.

Photos retrieved from the accident site along with environment Canada aviation weather reports confirmed that the weather conditions at the approximate time of the occurrence flight. The reflection of the sky and clouds on the surface of Lac Berté, revealed that weather was conducive to VFR flight; it was sunny with scattered clouds, winds were light to nil giving glassy water conditions for the lake surface; no thunderstorm activity or precipitation was visible in the area at the time the photos were taken.

The pilot held a valid private pilot licence since 1975 and a seaplane endorsement since 1976. Over the past several years, the pilot flew occasionally during the months of April through October, flying approximately 45 hours per year. The pilot had met all Transport Canada currency training requirements.

Records indicate that the aircraft was certified, equipped, and maintained in accordance with existing regulations and approved procedures. The last annual/100-hour maintenance inspection was completed on 03 August 2009. 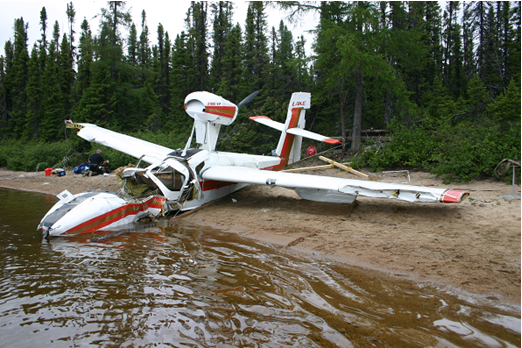 The 78-year-old pilot held a valid category 3 medical certificate. The pilot's last aviation medical examination took place on 23 July 2009. In 1987, it was found that the pilot had previously had a heart attack.  Also in 1987, the pilot was found to have diabetes mellitus (Type 2 diabetes). The pilot's family doctor was also aware of the pilot's health issues. The pilot was expected to complete and forward to Transport Canada, the results of various required medical tests relative to the diabetes and heart conditions, on an annual basis in order to maintain the category 3 medical certificate required for the private pilot licence. The pilot's next medical examination was due in July 2010.

The autopsies performed did not determine that either occupant had an incapacitating medical event in flight. Heart attacks or angina attacks do not always leave markers evident in a post-mortem examination.

Neither occupant died of injuries incurred during the crash sequence. Both were seriously injured and died of drowning. The pilot had fractures to the upper maxilla (jaw bone), and both wrists. Fractures to the pilot's wrists (bracing maneuver) would likely indicate that he was conscious and at the controls at the time of the impact with the water.

It is uncommon for the TSB not to be able to determine a conclusive finding or cause of an accident however the available evidence in this case does not allow a definitive single cause. The TSB suggested two possible accident scenarios.

The first possible scenario is that the aircraft had some system malfunction that was not determined during the post-accident examination. However, this scenario would not explain why the pilot, with much experience landing on water, and with ample space on Lac Berté to make a precautionary landing, was not able to land the aircraft safely on the water. Given that the lake surface conditions were glassy, the pilot would likely have chosen to land closer to a shoreline or island in order to help judge the height above the water. The aircraft was found 1476 feet from any shoreline, which indicates that the pilot likely did not actively choose the area in which it struck the water, either because the pilot was unable to do so or the situation did not allow time to do so.

The second scenario is a sudden medical event resulting in pilot or passenger impairment while in flight over Lac Berté. The passenger took pictures during take-off, climb and cruise suggesting there was no apparent imminent danger or worry at that point during the flight.

Both the pilot and the passenger had pre-existing health risk factors making it possible that either one of them may have experienced a medical event resulting in some degree of impairment possibly leading to distraction and/or a loss of control of the aircraft.