Don't Try This at Home 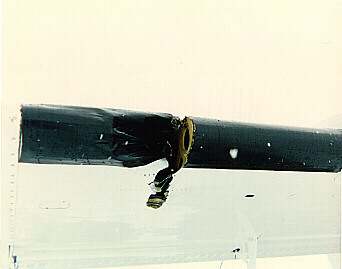 Damage to the right-wing leading edge.

On April 15, 1997, a de Havilland DHC-6-300 Twin Otter departed St. Anthony, Newfoundland, on a visual flight rules (VFR) flight to Mary’s Harbour with 2 pilots and 12 passengers on board. The aircraft was flown under an overcast cloud layer along the Labrador coast when, about 10 mi. from Mary’s Harbour, the cloud base lowered and the crew realized that they would not be able to maintain VFR. They climbed to 2000 ft. above sea level (ASL), and then proceeded direct to the YMH nondirectional beacon (NDB) in instrument meteorological conditions (IMC). After crossing the YMH NDB, the captain flew a racetrack pattern for the NDB A circling approach, a company approach not published in the Canada Air Pilot.

The crew stated that one to two miles short of the NDB, the aircraft broke out of cloud at minimums and they could see the airport. They turned right, flew downwind, and entered a descending left turn to land on Runway 11. Just short of the threshold, at about 50 ft. above the ground, the captain realized that he could not position the aircraft for a safe landing, so he initiated a missed approach. He applied full power, selected flaps up to 10°, and levelled the wings. The aircraft crossed the threshold of Runway 11 on a heading of about 130°M and, unbeknownst to the crew, the right wing struck a tree off the right side of the runway. The captain continued eastward, joined the circuit for Runway 29, and landed safely. The crew discovered the damage to the aircraft while taxiing to the ramp. None of the crew and passengers was injured.

St. Anthony is a sub-base for the company, and flight crews based there have no direct supervision and operate on a pilot self-dispatch system. Other than the annual mandatory check rides, the company does not perform periodic audits of the pilots’ operating standards or route checks, nor is it required to do so. The tree was about 20 ft. tall, located about 95 ft. to the right of the right edge of Runway 11 and 1200 ft. from the threshold. The tree was broken off 8 ft. 6 in. AGL, and it appears as though the wing struck it at that point. With the aircraft parked on level ground, the wing tip is about 11 ft. 6 in. above the ground. Damage consisted of an 18-in. tear running aft from the leading edge of the wing, 46 in. inboard from the wing tip, with damage to the internal wing structure and the de-icer boot.

Mary’s Harbour airport is uncontrolled and in uncontrolled airspace. The YMH NDB is a private NDB, and the only Transport Canada approved approach to the airport was the operator’s NDB A approach. There is a note on the approach chart stating that circling is not authorized north of Runway 11-29." Most of the airports along the Labrador coast are equipped for NDB approaches only and, generally, the instrument approach minimums at these airports are higher than VFR minimums. Therefore, flight crews will try to maintain VFR while flying between these airports in order to increase their chances of landing and completing their scheduled flights. The captain checked the en-route and destination weather before departing St. Anthony and determined that they would be able to get to Mary’s Harbour VFR. A VFR flight plan was filed but, because of marginal weather conditions in St. Anthony, a special VFR clearance for departure was required.

Standard operating procedures (SOP) had been developed by the company prior to the occurrence, but they had not been implemented into the company operations. SOPs ensure procedural uniformity and facilitate communication between crew members on issues such as changes to aircraft configuration and performance. Neither the captain nor the first officer communicated any altitude or descent information during the circuit procedure. Also, no communication took place regarding power settings, flap position, and proximity to the ground after the captain called for the overshoot.

Successful landings are normally preceded by a stabilized approach, where an aircraft has a constant rate of descent along the selected approach path; an appropriate, stable airspeed; a stable power setting; and is configured for landing. Both the captain and first officer stated that during the initial part of the overshoot the aircraft was flown at its best single-engine climb speed of 82 kt. with both engines set at maximum available power, propellers full fine, and the flaps at 10°.

The Flight Operations Manual cautions pilots that "In a go-around with flaps extended, the nose of the aircraft will point below the actual flight path." The stall speed with the wings level, flaps 10°, and an aircraft weight of about 12,000 lb. was calculated to be about 65 kt. Some of the passengers commented that they heard an alarm or warning horn during the latter stages of the approach and during the overshoot. The only sound that is similar to the passengers’ descriptions is the stall warning horn, which activates when the aircraft is approaching an aerodynamic stall.

Performance charts indicate that, with the flaps set at 10° and at an indicated airspeed of 78 kt., the aircraft should have been able to climb at about 1500 fpm at a climb gradient of about 0.18. The climb calculations assume take-off power, propeller rpm 96%, intake deflectors retracted, and no wind.

The report states that when he could no longer fly safely below the cloud, the captain elected to enter cloud, without filing an instrument flight rules (IFR) flight plan, and continue to Mary’s Harbour. When the aircraft broke out of the cloud prior to reaching the YMH NDB on the approach, the captain was faced with options. One option was to discontinue the instrument approach and join the circuit for a normal VFR landing. The other option was to complete the approach and land in accordance with the company NDB A, in which case circling north of the runway was not authorized. The captain’s course of action was not in accordance with either of these approved procedures.

When the crew saw the airport, there was adequate space to turn onto downwind and complete the circuit, but the captain did not adequately consider and compensate for the wind (027°M), which drifted the aircraft toward the runway during and after the turn onto downwind. During the turn onto base leg, the tail-wind component increased, which increased the aircraft’s ground speed. The result was that the aircraft was never established on a stabilized approach to the runway nor was it aligned with the runway down to as low as 50 ft. AGL.

The decision to overshoot was made when the aircraft was over the threshold of the runway, about 20° off the runway heading and at an altitude of about 50 ft. AGL. This decision was made too late and the procedure used was not aggressive enough to ensure obstacle clearance. A slow application of power, a settling of the aircraft when the flaps were raised, possible wind gusts, poor visual cues and pilot technique are possible reasons the aircraft did not climb immediately when the missed approach was commenced.

The TSB determined that the captain, in view of the wind and weather, did not adequately plan the last portion of the flight, and, as a result, he was not able to position the aircraft for a safe landing. He then delayed initiating the missed approach until it was nearly impossible to recover safely, although there must have been early indications that the final turn was not going to be successful. Then, given that the aircraft was very close to the ground when the captain initiated the missed approach, he did not fly aggressively enough to ensure that all obstacles in the flight path would be cleared.

In reviewing this article, the training folks here at Transport Canada commented that the development of an integrated program of commercial pilot training has identified a need to develop more pilot skills in handling circuits at lower, but still safe, levels. This type of training will be useful in getting pilots to be more proficient in handling IFR-to-VFR transitions, circling manoeuvers and other low-level VFR manoeuvering near the aerodrome.