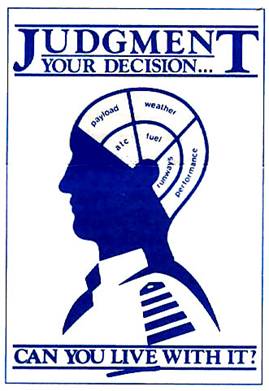 If you've decided to actively participate in the Pilot Decision Making workshops now being conducted by your Regional Aviation Safety Officer, you've already made a significant personal contribution towards the promotion of aviation safety in Canada. We hope that you'll attend and share your concerns at all of the PDM safety sessions being offered in your area.

If you're undecided about participating, contact your RASO and ask for more information about decision-making training and what it can do for you.

The workshops being presented across the country by aviation safety specialists were developed by an international group of experienced pilots and aviation psychologists. Although decision-making concepts might appear to be complex, the workshop materials are presented in language that pilots understand.

You'll benefit by discussing successful flight scenarios resulting from correct decisions as well as learn from the fatal mistakes of others that resulted from either wrong or no decisions. The sessions will help you identify risk, stress and negative attitudes and teach judgment and decision-making concepts. Some of the concepts may be new to you. If not, hearing them again will jog your memory. We recommend that you give Pilot Decision Making a shot. Who knows — the life you save may be your own.

You wake up in the morning, your brain clicks on and you have to start making decisions. Do you work? Do you play? What do you wear? What do you eat? If you're a flyer, you'll be deciding from preflight to post-flight. Are you prepared for it? Are you rested? Are you current? Can you handle it? Do you have a system to exercise sound judgment to assist you in completing a flight safely and efficiently?

Canadian aviation accident stats continue to reveal that too high a percentage of cause factors relate to judgment and decision making.

The following examples from a recent stack of Canadian Aviation Safety Board Aviation Occurrence Reports support that finding.

A Cessna A188B pilot decided to attempt a takeoff from a 16 ft.-wide dirt road. With ditches on either side, there was no margin for error. He lost directional control and ran the aircraft into the ditch on the left side, causing substantial damage.

The first poor decision was landing there. The second and costly one was attempting to take off.

A Piper PA31-310 Navajo pilot attempted a cargo flight with three scheduled delivery stops. During the deliveries, the aircraft wasn't refuelled or even shut down at the last two stops. Enroute after the last delivery, both engines stopped. The aircraft was landed wheels up in a ploughed f ield. Damage was extensive.

The pilot admitted that he didn't compute fuel requirements and stated that he was anxious to get home because his wife was ill in the hospital.
Being preoccupied and stressed can have a disastrous effect on decision-making processes.

Although the pilot of a Lake LA4-200 was not instrument rated and most of his recent flying had been day VFR flights, he decided to depart from a remote site in marginal weather at night. Shortly after takeoff, the aircraft impacted the ice of a lake at high speed. The pilot and passenger were killed. The decision for the night departure in snow showers was the wrong one for the day VFR operator.

After starting the Piper PA-28-140, the pilot went to lunch and left the aircraft engine idling for 20 min. After lunch, he noticed that the aircraft was covered with hoarfrost. He removed some from the wing-root areas, but left the outer wings as they were. After a longer-than-normal takeoff roll, the aircraft became airborne but wouldn't climb. The pilot attempted to turn to avoid some trees, but the left wing struck a tree. Damage was substantial.

We can learn from the mistakes of others, but it also helps when we upgrade or refresh our judgment skills. Whether you are a veteran flyer or a rookie, we recommend attendance at the Pilot Decision Making seminars that are being offered by your Regional Aviation Safety Officers.