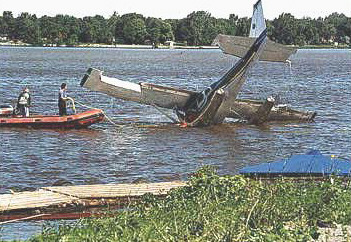 The following accident represents a nightmare for all pilots (what accident doesn’t?), but particularly for seaplane pilots. It was the subject of "Learning From Others," an excellent letter from a reader in Aviation Safety Letter 2/97, but the recent release of Transportation Safety Board (TSB) Final Report A96Q0114 gave us no alternative but to highlight this tragic accident before the summer of 1998 arrives. We will also address specific issues relating to the aft emergency exit on the Cessna 206 series floatplane and emergency egress from an inverted, water-filled aircraft. The following has been condensed from information contained in the TSB Final Report, which is available on the TSB’s Web site http://www.tsb.gc.ca/.

On July 20, 1996, the float-equipped Cessna U206F with six persons on board started its takeoff run on Rivière des Prairies, Quebec, on a water surface agitated by strong crosswinds from the right. The aircraft lifted out of the water at very low speed, travelled about 1000 ft. before taking off, and fell back on the water in a pronounced nose-up attitude. The pilot continued with the takeoff, and the aircraft lifted out of the water a second time. The left wing then struck the surface of the water, the left float dug into the water, and the aircraft capsized. The pilot told the passengers to unfasten their seatbelts as the aircraft rapidly filled with water. He then went toward the rear to try to open the two cargo doors to let the occupants out. A witness immediately proceeded to the site to assist the occupants. He opened the left front door, and the female passenger and her child evacuated the seaplane. As they had no life jackets, these two persons clung to the floats until the other rescuers arrived. The first firefighters and police officers arrived at the site about 15 min after the accident. The pilot and the other three passengers had drowned inside the aircraft.

The TSB determined that the pilot had been unable to maintain control of the aircraft, which was equipped with Robertson and Flint Aero kits, during a takeoff with 20° of flap in strong crosswind conditions. It also determined that the distribution of the passengers and the complexity of opening the leaves of the rear cargo door with the flaps extended to 20° contributed to the difficulty of the evacuation. There are several issues worth looking into here, but we will limit our discussion to two main areas: (1) the pilot’s decision-making process before and during the short flight, and (2) the aft emergency exit of the Cessna 206 and emergency egress from a water-filled, inverted aircraft.

The facts as provided in the TSB Report would lead many to question why this flight was attempted. Unfortunately, we will never know for sure what led the pilot to go ahead with it. Some would postpone a pleasure flight in a seaplane with three children on board when faced with strong crosswinds and agitated waves, but it often becomes a personal judgement call; it can be assumed that other experienced seaplane pilots might also have decided that the conditions at the time were acceptable. In any event, the pilot was obviously confident in his ability to handle the crosswind; perhaps the fact that the aircraft was equipped with a short takeoff and landing kit and auxiliary wing-tip tank kit, which increase lift and reduce the stall speed of the aircraft, reinforced his confidence.

The second question mark arises from the fact that, during the initial takeoff, the aircraft fell back on the water in a pronounced nose-up attitude, but the pilot decided to continue with the takeoff. The only answers to these questions reside in the complex world of human factors, as they apply to the pilot’s own motivations and self-imposed pressures to go ahead with the flight. As stated in the ASL 2/97 article, remember this particular occurrence the next time that you are faced with similar circumstances.

A second fatal accident in less than 12 months brought the issue of the Cessna 206 emergency exit to the forefront. On June 1, 1997, a U.S.-registered float-equipped Cessna 206 had a similar accident at Carroll Lake, Ontario, when the aircraft nosed over in the water, and two passengers were unable to evacuate the aircraft and drowned (TSB A97C0090). In this particular case, the pilot had left the wheels down when he touched down on the water.

The Cessna 206 is equipped with a double cargo door on the right rear side that doubles as an emergency exit. When the flaps are extended to 20°, the forward leaf of the cargo door can open only about 8 cm, and this makes it difficult to fully open the aft leaf of the cargo door. The emergency-exit instructions found in the owner’s manual say that, if it is necessary to use the cargo doors as an emergency exit and the wing flaps are extended, the doors are to be opened in accordance with the instructions shown on the red placard mounted on the forward cargo door. According to the TSB Final Report, the instructions found on the placard of the accident aircraft were as follows:

In ASL 7/90, as a result of a safety information letter from the Canadian Aviation Safety Board, we showed the correct procedure for opening the doors with the flaps down. The procedure is repeated below, along with the original graphic, which clearly illustrates the difficulty:

(a) unlatch the forward cargo door;

(c) unlatch the rear cargo door by pulling down on the red handle (figure 2);

(d) partially open the rear door until the door latch at the base of the door is clear of the floor (figure 3);

(e) close the rear cargo door latch by placing the red handle into the well in the door jamb (the locking pins will now be extended, but clear of the fuselage); and

This sequence shows that the placard leaves out some of the above steps. Now this procedure is quite demanding for most people under normal circumstances. Picture the process in the dark, in an inverted airplane, in rushing water and with two or three distressed passengers trying to escape.

The Cessna 206 emergency-exit issue has been addressed extensively in the past by, among others, the TSB in 1985 and 1989; the ASL 7/90 article referred to above; Cessna service bulletin (SB) SEB91-04, issued on March 22, 1991; and many letters exchanged among the industry, Transport Canada (TC), the TSB and the Federal Aviation Administration (FAA) since the last two fatal accidents. In addition, you — the owners, operators and associations — are well aware of the problem. Although the SB simplifies somewhat the steps required to open the double aft cargo door, the procedure does not eliminate the jamming of the forward cargo door against the flaps when they are lowered. TC clearly stated to the FAA its position that, even with the modification, when the flaps are down, the Cessna 206 emergency exit procedure remains a multistep procedure that can be difficult to execute under emergency conditions.

Following the Carroll Lake occurrence, TC reiterated its concerns to the FAA, and, in its November 1997 reply, the FAA said that new series 206H and T206H would incorporate the provisions of SEB91-04. The FAA also said that, if TC were to issue an airworthiness directive (AD) against 206 series airplanes, the FAA would examine it for possible similar action in the United States. However, owing to the proportionally wider use of floatplanes in Canada than in the United States, the FAA could not say at that time whether an AD with the same intent would be supported by the evidence available from its U.S. databases.

Meanwhile, on November 16, 1997, TC issued Service Difficulty Alert AL-97-04, which strongly recommends that owners and operators of all Cessna 206, U206 and TU206 aircraft incorporate SB SEB91-04; instruct flight crews to brief passengers and demonstrate the steps necessary to open the exit when flaps are lowered; and ensure that flight crews periodically practice the procedure for opening the emergency exit from outside the aircraft when the flaps are down. It also recommends that there be a maximum of four occupants in the aircraft when waterborne operations are being conducted.

At this time, there is no modification available that completely resolves the emergency-exit issue. Discussions are still ongoing among TC, the FAA and the industry about the possibility of AD action.

The TSB’s final report refers to a study relating to escape and survival from a ditched aircraft. It states that the rotation of the body underwater and loss of gravitational reference makes disorientation inevitable for survivors prior to their escape from an inverted aircraft. In addition, the darkness produced by water flooding into the aircraft aggravates the disorientation. Survivors who were questioned in this study reported having experienced confusion, panic and disorientation in the occurrences. The study concludes that only those who have experienced disorientation in an underwater trainer understand the problem and know how to deal with it to get out and survive.

Having personally experienced an underwater escape trainer twice, I can attest to the fact that the above statements reflect the reality of an underwater egress situation, except that, in the trainer, you expect the situation to arise (there is no surprise effect); you have a plan or escape route in your mind (or at least you think that you do...); and you are in a clean pool with safety scuba divers. Not so in the real world. Nevertheless, underwater egress training is invaluable for any pilot who flies regularly over water, regardless of the type of aircraft flown. As a matter of fact, passengers or non-pilot crews who also fly regularly over water should consider underwater escape training. Once you have had the training, you will also be in a better position to brief your passengers about what to expect... should the unexpected occur.

Finally, ASL 2/95 featured "Seaplane Accident Survival" as its lead article, and it contained excellent information on this subject. If you do not have a copy of that article, we will be pleased to send you one upon request.