Controlled Flight Into Terrain (CFIT) — The "Why" is Never Easy 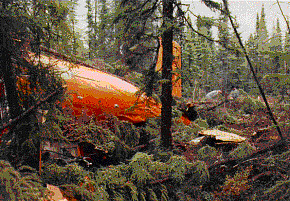 On June 1, 1994, the Swearingen Metro II had completed a MEDEVAC from Coral Harbour to Churchill and was returning home to Thompson, Manitoba. The pilot was flying a localizer back course approach when the aircraft sliced through the HOTEL non-directional beacon tower (NDB) that marked the final approach fix (FAF) at Thompson. The aircraft was in a wings-level attitude but only 62 feet above the ground when it hit the 87-foot tower. It was over 800 feet below the published beacon-crossing altitude and almost 300 feet below the minimum descent altitude (MDA) for approach.

The impact tore five feet off the right wing. The right prop ripped a tower support cable, toppling the tower to the ground. As the aircraft hit a second transmission tower, it rolled steeply into the ground. Both pilots died instantly. The MEDEVAC nurse, who was resting in the back, was thrown from the wreckage and, although severely injured, survived.

The captain was a very experienced 20,000-hour pilot with over 3000 hours flying MEDEVACs on the Merlin II. The first officer had almost 4000 hours flight time.

Why did this experienced crew fly into the ground?

The TSB investigation (report A94C0088) "determined that the flight crew lost altitude awareness during the approach and allowed the aircraft to descent below a mandatory level-off altitude." Among contributing factors cited in the report were "deviation from published approach procedures, ineffective in-flight monitoring of the approach, and pilot fatigue."

The first officer was in the left seat at the time of the accident and was the pilot flying (PF) (his grand total in the left seat of a Merlin was three hours). Over the two-week period leading up to the night of the accident, he had been holding various standby duties, accumulating 180 hours of standby. He had flown on nine of the 14 days on 19 separate legs totalling over 40 hours of flight time. Several days prior, he had been awake for 36 continuous hours. He had expressed concern to friends about the stress he was under.

A few days prior to the accident, his efforts to secure employment with a scheduled air carrier had fallen through. Friends noted an out-of-character mood swing — discouragement, irritation and increased anxiety.

At the time of the accident, he had been awake for 17 hours and on duty for 9 ½ hours.

The captain was fresh off an extended period off duty, but at the time of the accident had also been awake for about 17 hours.

The weather forecast called for 800-foot ceilings with visibilities of six miles, occasionally lowering to two miles in fog. The official observation, taken just prior to the accident, reported a 1200-foot ceiling with 15 miles visibility. The expectation of being in visual conditions may have caused the crew to relax their procedures. However, fog was rapidly developing northeast of the airport, and the crew may not have been in visual conditions when the accident occurred. Weather conditions, forecast or actual, do not, however, justify being more than 800 feet below the published beacon-crossing altitude when conducting an IFR procedure.

In reconstructing the aircraft's flight profile, TSB investigators determined that the crew could not have flown the published procedure but had flown direct to the FAF. The aircraft was in a high-rate descent when intercepting the localizer just prior to the NDB. Both pilots were coping with a high workload.

In the right seat, the captain was performing the duties of the pilot-not-flying (PNF). However, his instruments were not set up to effectively monitor the approach. Although the ILS frequency was dialled in, neither the course setting nor the heading bug were set. Nor was the altimeter set to station pressure. In addition, the altitude alerting system was found set at 5400 feet — it was either never set to assist the pilots in their descent, or it had been cranked up to an arbitrary altitude to deactivate it so that the bright yellow light and aural warning would not distract them during the final approach.

The last altitude warning available to the crew would have been the radar altimeter. It was found set to MDA and the warning light was ON at impact. However, the light is located by the pilot's right knee and may not have been part of the pilot's normal instrument scan prior to passing the beacon inbound. In the high ambient noise of the Merlin cockpit, the audio warning, a pulsating 80-decibel sound, would have been barely audible to the crew wearing headsets.

The insidious factor in this CFIT accident is fatigue.

The accident occurred after midnight and both pilots had been awake for 17 hours and on duty for 9 ½. The pilot flying had been holding standby duties for extended periods. His sleep patterns had been disrupted by issues related to both the job and his personal life. He was operating with elevated stress levels. Even for the captain, 17 hours awake would alone have induced some level of fatigue.

The combination of circadian rhythm, hours awake and workload placed both pilots in a fatigued state. A tired person is more likely to take risks. His or her performance of cognitive and vigilance tasks is impaired. Failing to perform the routine, or taking a shortcut, are much more likely than when a person is refreshed and alert.