Beechcraft Bonanza F33A - Loss of Control and Collision with Terrain

The instructor was certified and qualified for the flight in accordance with existing regulations. He held a commercial pilot licence with a group 1 instrument rating and was qualified to fly single and multi–engine land aircraft. He had accumulated approximately 900 hours as an instructor. One month prior to the occurrence he was issued a Class 1 Flight Instructor rating.

Records indicate that the aircraft was certified, equipped, and maintained in accordance with existing regulations and approved procedures.

The CYKZ forecast for the time period was generally VFR with temporarily reduced visibility to 5 miles in light rain showers and mist, with broken clouds at 2000 feet. 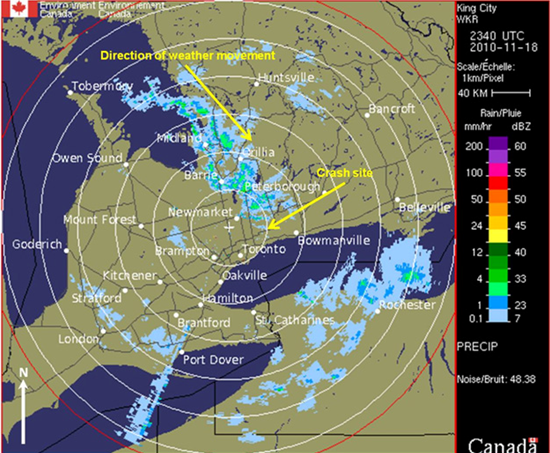 Environment Canada radar indicated precipitation in the form of rain moving in a southerly direction towards Lake Ontario from Lake Huron. The graphical area forecast (GFA) clouds and weather forecasted isolated towering cumulus clouds, 2 statute miles visibility in light snow showers with a ceiling of 1000 feet agl over and off Lake Huron. The GFA icing turbulence and freezing forecast issued at 1242 and valid at 1900 showed no icing being forecast with a freezing level at 2500 feet asl. A second GFA issued at 1832 and valid at 1900 showed moderate mixed icing between 3000 to 9000 feet asl. This forecast was not available prior to the aircraft departing CYKZ. Although no PIREPS were received prior to the occurrence, aircraft in the vicinity and at an altitude of 2500 agl, were encountering light icing conditions with mixed precipitation, and a temperature of approximately − 2°C.

Although CYKZ and CYOO airports were reporting VFR weather conditions, at the mid–point between the two, there were ground reports of rain mixed with snow with temperatures suitable to icing.

During the return flight, radar information indicated that the aircraft maintained an altitude of approximately 2300 feet above sea level (asl) and a ground speed of 130 knots  As the aircraft headed towards CYKZ, the instructor contacted the tower and requested an approach to runway 33. The clearance was given to the aircraft but no acknowledgment was provided by the instructor. There were no further radio transmissions from the aircraft.

A police helicopter was dispatched to the same area and, using a search light, was able to locate the wreckage.