At approximately 1448 the Cessna A185E floatplane left the La Tuque, Quebec, seaplane base for a 20-minute sightseeing flight. The aircraft took off towards the north and climbed to an altitude of 1600 feet above sea level. After approximately 12 minutes of flight time, the engine failed. The pilot decided to proceed with water landing in the Bostonnais River.

During the descent, the pilot attempted to restart the engine, but without success. The pilot executed a steep left turn in order to avoid terrain but the aircraft lacked sufficient airspeed for the successful completion of the turn. The aircraft’s wing stalled and the pilot did not have sufficient altitude or thrust to recover from the stall. The aircraft struck the surface of the water in a nose down attitude and came to rest inverted in the water. Local residents reacted quickly, contacting emergency services and offering assistance.

The aircraft was occupied by the pilot and 4 passengers. One passenger was fatally injured as a result of this accident.

The pilot held the necessary licence and qualifications for the flight, in accordance with existing regulations. The pilot had accumulated 550 flight hours, approximately 400 of which were in a Cessna 185 floatplane. There was no indication that fatigue contributed to this occurrence.

Prior to the third and final flight, the pilot did not check the fuel level and estimated that there was approximately 10 gallons in the left tank and 15 gallons in the right tank.

The pilot took off with the fuel selector in the “BOTH” position but once airborne, switched to the left tank. Approximately 12 minutes after takeoff and at an altitude of 1600 feet ASL, the engine stopped producing power due to fuel starvation. 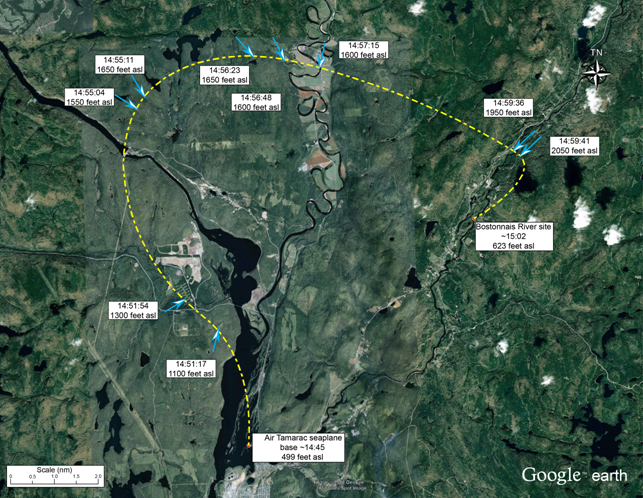 TSB investigators discovered that due to the pilot’s failure to positively check the fuel quantity prior to the occurrence flight, there was no way to predict the precise moment at which the left tank would become void of fuel causing loss of power from the engine.