Stay With Your Aircraft

DON'T WALK OUT... Stay in the Prime Search Area 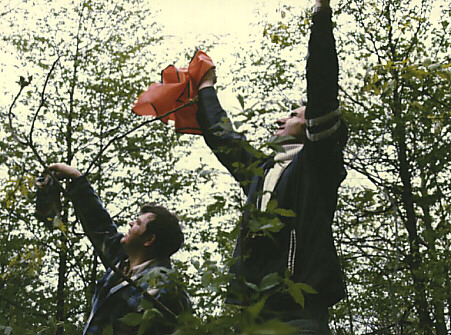 Years ago, when luckless aviators found themselves contemplating a wrecked biplane zillions of miles from the nearest outpost, they had no choice but to walk out. After all, they had just totalled the only aircraft in the area. And without a homing pigeon, they had no way of telling anyone where they were, and what had happened to them. So, back in the early days of aviation, walking out was de rigueur.

But it was at least 40 years ago when such teaching went out of style. With the advent of SAR forces, radios and, more lately, ELTs and satellites, the advice is to stay with the aircraft.

Why? Because when SAR starts looking for people, it goes to the last known point, then follows the proposed track. Although they're really looking for the people inside the airplane, they have long since learned that the aircraft is easier to see than the people. Thus the search tends to concentrate on that area between the last known point and the proposed destination.

The search isn't confined to that area, but it does start there, and initially concentrates there. During the search, SAR and CASARA crews look for anything unusual. You might think that a person wandering through the woods in a passionate purple T-shirt and bright yellow stretch pants would stand out, but such targets are pretty small. Even the larger remnants of, say, a single-engine Cessna or Piper are hard to see. But they are bigger than the average person.

Thus, SAR organizes the searches to find the downed aircraft. What does this mean to restless campers who think that walking out is showing admirable initiative? Unless they are retracing their proposed flight route, it means that they are moving away from the primary search area; away from possible detection.

Once in a very long while, there is a good reason to move away from the crash site. If the aircraft slides underwater, you don't want to sit in the middle of the lake for too long, amusing the fish. But you shouldn't go much farther than the nearest shore. If you're in the middle of a large forest fire, you'd probably want to move smartly to the upwind side. If you're surrounded by opposing factions in a hot war, walking — even running — out becomes an option. And, if you're in the middle of a Tyrannosaurus Rex family reunion, walking out could suddenly be an idea whose time has come. Better the idea's time should come than yours.

Failing any of the above, you might as well stay with the wreckage. If you can get at the ELT, move its function switch to ON. Then leave it there. The SAR tech who comes to your rescue can make any further switch selections.

Of course, you want to make yourself visible to SAR or CASARA crews. During the day, smoke gets attention. Your campfire, covered with pine boughs, will have local environmental wallahs on your case in no time. You can also add a touch of oil from the engine crankcase, just to make the smoke smokier.

Shiny bits from the aircraft can make signalling mirrors that you can flash into the SAR pilots' eyes. Or, as one pilot did recently, you can arrange larger chunks of aircraft in a nearby clearing to make it show up better for airborne searches. This isn't always an option, as Providence does not scatter nearby clearings to order, but it did work a few weeks ago.

Search efforts taper off at night, as SAR crews are not wild about flying into mountains. However, there are overflights, and most pilots are pretty good about reporting fires in areas where no fires had trodden before. Thus, an especially exuberant fire should get attention. However, you should take precautions to prevent being a feature attraction in the Great Forest Cook-off.

If you're an incorrigible Type A and think you must walk out — don't. Not unless you can see the lights of a nearby town, and the road connecting you to it. Even then, remember that distances are deceiving. If you must leave, leave a message of some sort. Let SAR know that you survived, and that you are walking northeast to salvation.

Salvation is fine. Too often however, it becomes eternity.

Stay with your aircraft.